← more from
INFRACom!
Get fresh music recommendations delivered to your inbox every Friday. 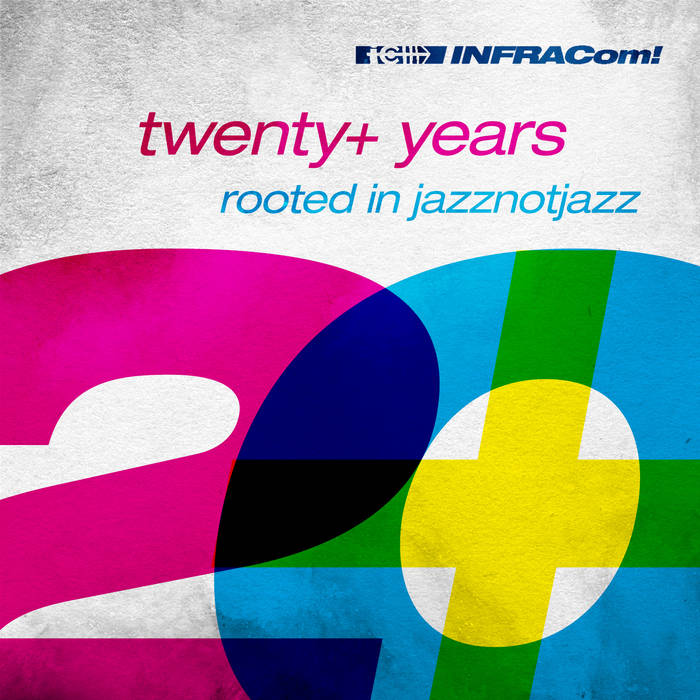 Philip Graham An extraordinary anthology of jazz, nu-jazz, drum and bass, hip hop and related grooves. Not a weak track in the bunch. The moods of the varying artists' music vary, but the tracking keeps the momentum flowing nicely. The digital download comes with a very informative, attractive booklet. Favorite track: Celebration Of Live (Song For Simon).

Alan Arscott Love this track! Thanks to Michael Reutten for recommending! Favorite track: Celebration Of Live (Song For Simon).

With 20+years in jazznotjazz we are celebrating the anniversary of an independent label, a platform and culture of independent decisions.

Twenty+ years ago DJ´s and music lovers Namé Vaughn und Jan Hagenkötter established INFRACom! with the first releases of Shantel and Jan Peter Schwalm (aka Slop Shop). By that time they could not imagine that Shantel would reach worldwide recognition as the „King of Balkan-Pop“ and Jan Peter Schwalm would collaborate with Brian Eno and satisfy electronic music fans and the feuilleton with his „Kraftwerk interpretations in the London Sience Museum. With Megashira and Phoneheads they devolped the two most successful d&b artists in Germany. Megashira has been invited to play live at the legendary Glastonbury Festival alongside Roni Size and other brilliant UK d&b artists of that time and Phoneheads performed with the Düsseldorf Symphonic Orchestra and Cleveland Watkiss in sold out venues.
Last but not least Jan & Namé impressed with the project [re:jazz], which has been copied multiple times since.

...of the nineties Jan & Name focused on the idea „of the need“ of independent structures to develop new and yet unknown artists besides the mainstream. With over 160 catalogue numbers to date INFRACom! offers a wide repertoire of all modern music genres beyond the mainstream within a range of electronic, jazz and nu-jazz, d&b and house music. INFRACom! worked and collaborated with regional artists and internationally renowned musicians.

National and international stars such as Till Brönner, Joy Denalane, Lisa Bassange, to Roger Cicero and the Düsseldorf Symphonic Orchestra up to the Norwegian jazz musicians Nils Petter Molvaer and Bugge Wesseltoft, Nathan Haynes, Marc de Clive-Lowe, US House diva Ultra Naté, Berlin DJs from Jazzanova, Peter Kruder from Vienna, Jazztronik from Japan, Nicola Conte from Italy have participated in productions and releases.

Today, INFRACom! is one of the long lasting independent labels in the electronic and new jazz sector in Germany. The artists chosen are not limited by a certain musical style - the label is always open for interesting new projects. Beside music albums they produced three DVD documentaries about their artists, very successful in Japan where most of their productions have been released domestic. Jan and Namé have dedicated their efforts over the last decade to establish local and national structures for club and music culture in Frankfurt am Main.

The term „jazznotjazz“, which is used for the anniversary release is originally from DJ Smash Hunter from NY who released a 12“ on his own labels New Breed and Eightball in the beginning of the nineties under this moniker. This 12“ (Flip & Trip), a hybrid of jazz and heavy electronic broken beats influenced Jan & Namé to that extend that it became the key vinyl by the time in their dj sets. Eventually they overtook the name and defined it as the motto for their future work.

„jazznotjazz is not only a musical style, it is also an attitude of crossing borders musically and geographically, no matter what color or flag. We try to melt musical extremes while at the same time paying tribute and respect to the roots. jazznotjazz might be jazz but that's not necessary. Brazil, Afro, House, Electronic, Soul & Funk build the musical playground which interests us. Especially if these genres intersect with each other. Artists and sounds beside the mainstream, ideas and visions.“

Paying tribute to the roots is the center of their efforts, the aim is not to cross over or to be trendy, it is more about social conservative ideals of quality and integrety.

And because Jan is not someone who lives in the past but always looks into the future, the anniversary album contains only fresh/recent recorded and unreleased titles....(no boring „best of“exploitation.)

Nearly all artists who have released their work on INFRACom! during the last two decades have been asked to record one new title for this anniversary release. Besides Nekta, Meitz, Gabriele Poso, Rime and Aromabar the release features artists who are not active anymore. Megashira, Taxi, Phonheads and Dublex Inc. went to the studio only to record one new title for this project. This emphasises the difference between an indipendent label run by people with love for the music and their artists compared to a major company business. It is the best proof for the relevanz of independent structures in the music business.

As one of the key players and most versatile musicians on INFRACom!, Matthias Vogt is represented with three of his projects on the release. First of all [re:jazz] with the very souljazz influenced title „Love will find you“, secondly with his (Jazz)Trio project with two releases on INFRACom! so far and last as part of „A Coral Room“ a new project he recently started with Oliver Leicht (as part of [re:azz]) and drummer Oli Rubow.

An extraordirnary story tells the title „Celebration of Life“ (Song for Simon) by Woodland Conclave aka Perry Hemus (UK). The track was written and dedicated to Simon Riches, a great friend of Perry Hemus' and the one who introduced him to Jazz. Perry Hemus, the head behind this project agreed in 2007 to record/release an album with INFRAcom! and presented the first 4 excellent titles all recorded in an old windmill somwehre in the UK. Then Perry Hemus sustained a hand injury which delayed the release. Now after 7 years the LP is finally ready for a release. This track along with eight others exist and may sometime be released intended as a concept LP in the near future on INFRACom! Sometimes the process is a longer one but it´s never too late for good music to be released.

With „A Chance for Peace“ the one and only cover-version (Lonnie Liston Smtih), recorded by Mop Mop with vocals by Sarah Sayed (from Rime), this release pays tribute and respect to the roots and completes the picture of INFRACom!.

Bandcamp Daily  your guide to the world of Bandcamp

Semiratruth joins the show to discuss their latest release, "loading..".